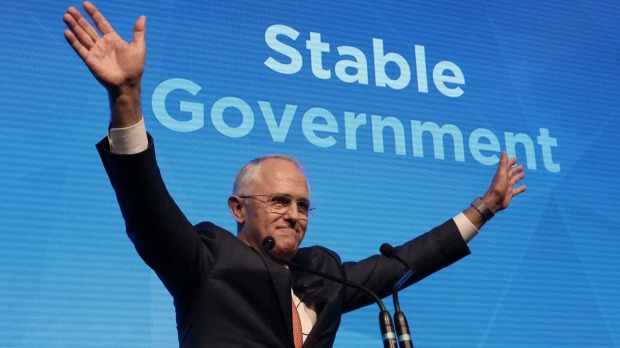 And the winner is…certainly not the Australian people.

We find ourselves coming to the end of an 8-week campaign when Australia finally goes to the polls this Saturday. The nation will let out a collective sigh of relief, as we choose who to govern us for the next 3 years.

Will it be Malcolm Turnbull and ‘Jobs and Growth’ or Bill Shorten ‘Putting People First’?

Will we see the Governments plan to cut company tax by $50b or will Labor’s plan to save Medicare win out?  Save it from what you may well ask? Well, according to Labor the Coalitions plan to privatise Medicare (which is totally rejected by Malcolm Turnbull).

This campaign has been anything but inspiring.  Rather, both sides have been engaging in a ‘tit-for-tat’ political schoolyard game, of ‘he said, he said’.

As it stands, Labor needs to win 19 seats to win Government but the Coalition can only afford to lose 13 seats before we see a hung parliament.  An outcome the nation certainly can ill afford.

What Do We Know?

With the budget in deficit to the tune of $40 billion and Government debt heading towards $550 billion for 2016/17, both sides are leading with a ‘trust us’ and don’t trust our opponent approach.

The problem for both sides is, as well as facing budget deficits way into the future, both leaders face a ‘trust deficit’ going into Saturdays election.

While the Government have a natural advantage on economic management, the electorate on the whole are increasingly disgruntled by both the Labor and Liberal parties.

You may be surprised to know that the results of Monday’s Newspoll indicate up to 21% of the electorate intends to vote for neither the ALP or Liberal parties.  This in fact mirrors the result of the 2016 election and suggests that many voters are disillusioned with the major parties.

It’s possible this figure could be even higher when the polling booths close on Saturday.

The election campaign can really be summarised in one word – BORING.  However, boring is an effective campaign strategy for Malcolm Turnbull.

A boring campaign is a safe campaign.  With the absence of a galvanising issue for the Opposition to motivate the people to dismiss a first-term Government.  Bill Shorten may have out campaigned Malcolm Turnbull, but he hasn’t made the case for change.

Where is the Vision?

The question on every ones lips is… where is the vision?  It’s a good question that cannot readily be answered.

When Malcolm Turnbull replaced Tony Abbott the community had high expectations that after two years of his Prime Ministership, that at last Australia had a leader who would deliver a vision for the nation.

Malcolm Turnbull took office with a deep well of goodwill, and a community tired of the revolving leadership door.  The public believed he would be a visionary leader.

No one was looking to Bill Shorten for vision and by the end of 2015, rather his leadership was looking shaky and the question was would he survive through to the election.

So what has happened since then?

Malcom Turnbull started to talk the talk in regards to major policy reform, particularly taxation.  After floating one policy initiative after another, nothing became of them.

Bill Shorten started from ground zero on the policy front.  He announced controversial changes to negative gearing and superannuation, driving the policy debate, and in the process gaining ground on Malcolm Turnbull.

Finally, Bill Shorten started to look as if stood for something.  Malcolm Turnbull on the other hand was seen as floundering on policy and this fed a perception that he was failing to live up to expectations in regards to his Prime Ministership.

So here we are, 4 days to go in what has been a lack lustre campaign and the nation is still uninspired by our leaders lack of political vision.

And the Winner Is?

Despite the polls showing a close election and many around 50:50 in two party preferred terms, Malcolm Turnbull is on track to be returned to Government with a reduced majority.

In the 150 seat House of Representatives, the Government currently hold 89 seats, the ALP 57 and the crossbenchers 4.

Based upon the published polls and in particular, marginal seat polling –  it’s clear that the Labor party cannot find the extra 19 seats they require to win Government.  The best case scenario sees Labor winning an additional 8-12 seats.

Assuming this outcome, the Government would be returned with between 77 to 81 seats, (with 76 required to form Government).

The big unknown is the Nick Xenophon Team impact on the 11 South Australian Federal seats.  Both major parties are under threat and both will be holding their breath until the final votes are counted on Saturday.

No one quite knows what will happen in South Australia.  The Nick Xenophon Team may well win seats themselves or have their preferences determine the outcome in both Labor and Liberal held seats.

The Government has been campaigning hard on the prospect of another Labor, Green, Independent minority Government and the chaos this would bring.

Whether the Coalition believe this to be a real possibility or whether it is just a great scare campaign (up there with Labors’ Medicare privatisation claim), the memory of the Gillard minority Government is probably recent enough to worry voters.

Is this outcome a possibility or just pure scare mongering?

According to the betting markets, the chance of a hung parliament is 25%.  So while not impossible, there is a small chance it could occur.

What scenario could unfold that could see Malcolm Turnbull win 75 seats or less?

It would take a particularly bad day for Malcolm Turnbull to lose majority Government, but there is a scenario worth considering.

With the Government holding a notional 89 seats after the electoral redistribution and including the former seat of Fairfax (held by Clive Palmer) in the Governments column, consider this.

The polls are suggesting Labor may win from the Government 8 to 12 seats, so let’s assume they win 10.  All of a sudden the Government go from 89 to 79 seats and only 4 away from a hung parliament.

This is where it could get interesting.  With former independents Tony Windsor running against Barnaby Joyce in New England and Rob Oakeshott running in Cowper (against the sitting National Party MP), these are two seats to watch on election night.

A poll published only late last week, had Rob Oakeshott at 50:50 in two party preferred terms.  In New England, the Government is confident of holding off Windsor, but what if Windsor were to win?

If Windsor and Oakeshott were to return to Parliament, then all attention will be on the X-factor (Nick Xenophon Team) in South Australia.

Labor cannot lose any of the seats it currently holds across the nation in order for this particular scenario to play out.

The most probable and likely outcome this Saturday is a returned Turnbull Government with a reduced majority.

These are the key reasons why:

What you can expect:

After a near 60-day election campaign, may the force be with the 15.6 million Australians who will go to the polls this Saturday.