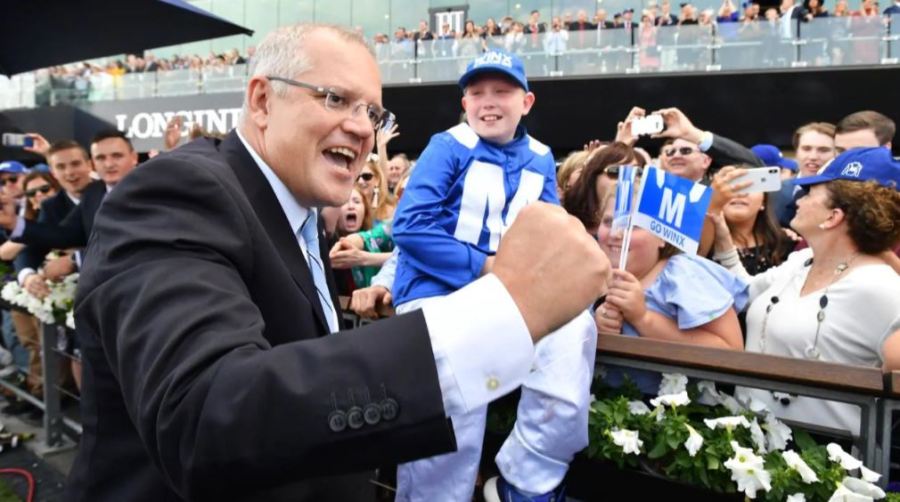 As the nation hurtles towards the election on May 18 will it prove to be Scott Morrison’s date with destiny or Bill Shorten’s ultimate triumph?

Billed as a choice between a strong economy and lower taxes under Scott Morrison, or a fair go under Bill Shorten – the race to the polls is on.

The role of minor parties and their preferences will be crucial.  With just over 20% of electors vetoing the major parties in the lower house and just over 30% in the upper house, the minor parties will once again prove to be influential to the outcome in both houses of Parliament.

Here’s what is at stake:

This means for either the LNP or Labor to govern they need to secure an outright majority of 76 seats. Last election, Malcolm Turnbull was returned to Government with a bare 76 seats or, one seat majority.

Following defections to the House crossbench and the loss of the Wentworth by-election, the current numbers in the House of Representatives include:

Who is the front runner?

There are a few factors to consider when determining the odds-on favourite come May 18.

For the Government to be victorious they need to achieve the following:

For Labor to win, they will need to secure:

The table below highlights this by showing each major party’s 13 most marginal seats. 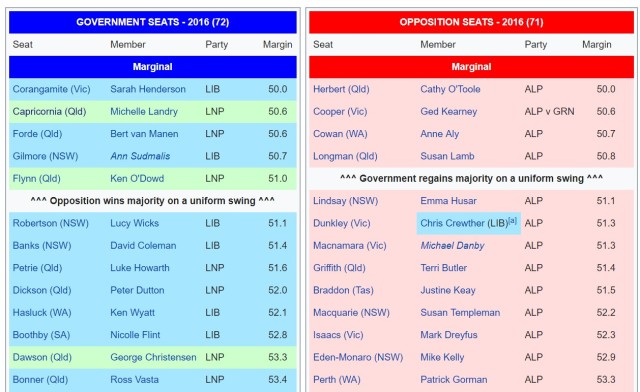 The race in Queensland is crucial for both campaigns.

The Government alone holds 5 of its most marginal seats in Queensland on a margin of 2% or less, including the seat of Dickson held by the Immigration Minister Peter Dutton.

This means Labor could win Government by picking up those 5 seats in Queensland with no gains in any of the other states and no Labor losses.

Queensland is important to both sides in the upcoming election it can be assumed to be a key reason why the Government has established its election HQ in Brisbane.

The key reason why?  Traditionally, Labor does far better from minor party preferences than the LNP. It is for this reason alone that the ALP can win Government with a lower primary vote than the LNP need to retain Government.

The Race in The Senate

Regardless of who wins on May 18, neither ALP or LNP will control the Senate.

If Labor wins Government even combined with the Greens in the Senate – they will not have the 39 votes needed to have a Senate majority. This will make once again, the Senate crossbench just as important and influential in determining the fate of legislation as it has been for the Abbott/Turnbull/Morrison Governments.

The current numbers in the Senate include:

This is a half-senate election. Following on from the double dissolution election of 2016 where all 76 Senators went to the polls, resulting in the largest crossbench (19 Senators) elected in the history of the Senate.

Of 19 Senate crossbenchers, 12 face re-election and 7 will not, because the 7 not facing re-election won 6-year terms in 2016 and the remaining 12 secured 3-year terms.

The Senate crossbench will, therefore, start with 7 Senators.  The only question will be, how many will join them in the winner’s circle?

Of the 12 facing re-election, 6 are Greens, 1 from each state.  It is highly likely given current polling that all 6 could be re-elected but it is certainly hard to see the Greens drop below 5.

Derryn Hinch stands a chance of being re-elected from Victoria, One Nation is expected to win a Senate seat in Queensland and could poll well elsewhere.  Jacqui Lambie is a strong chance to make a comeback in Tasmania.

Based on those possible outcomes alone, the Senate crossbench could tally up to 15 or more.

It is also worth noting that in the recent NSW election, the combined One Nation and Shooters vote was over 12%.  With 14% required to get elected to the Senate, this puts One Nation in with a real chance for a NSW Senate seat.

In South Australia, the focus will be on whether Centre Alliance, formerly the Nick Xenophon Party will be able to secure the re-election of Skye Kakoschke-Moore, who had to resign due to dual citizenship.

Will the electorate reward Scott Morrison and forgive the Liberal Party sins of the past or will Bill Shorten ride into office on his ‘fair go’ agenda!!

This election is for Bill Shorten and Labor to lose.

Having won 53 Newspolls in a row, the trend is your friend and Labor will be hoping that continues until election day.

For the Morrison Government, their re-election prospects rest on strengthening of their primary vote.  To be in with a chance, the LNP primary vote has to be around 43% or better.

As Paul Keating once said, “When you change the Government, you change the country”.  This election is a real fork in the road for the nation, with two very different competing agendas on offer.

Regardless of who wins Government, neither Labor or the LNP will control the Senate.  The Senate crossbench will be as relevant in the next Parliament as it has been in the outgoing Parliament.

For Labor with an ambitious tax reform agenda that underpins their whole reform program, the new Senate could well prove to be their biggest gamble!

We’re off and running – will voters take a punt on a Shorten or will ScoMo be a sure thing?